This Is The Darkest Timeline It’s hard to imagine this Brooklyn Nets team any worse. Their big acquisitions this summer have fallen flat, both victims of age and health. Their longest-tenured star and arguably their best player is out for the year, set to undergo his fourth surgery in two seasons. Their head coach, primed for stardom, is on the receiving end of raucous boos from fans that once revered his mere presence.

Everything that could have gone wrong hasn’t just gone wrong: it’s split at the atomic level, flipped upside down, nosedived head-first into adversity, and laughed in the face of happiness. How can you explain it? Even if you thought the Nets would struggle, you’d be hard-pressed to find anyone who thought they’d be this bad, and the ones that do are stuck in a bit of revisionist history. Nobody saw the hellscape of 10-20 coming.

To figure it out, we may have to look at the television series “Community,” specifically an award-winning episode called “Remedial Chaos Theory.”

Note: the next few paragraphs are solely to provide context for “Remedial Chaos Theory.” Ardent fans of Community can skip down to the next section. Or, read it, because if you’re an ardent fan of Community, you’ll probably want to remember it anyway.

“Remedial Chaos Theory” deals with a basic, albeit complex, premise: a group of friends has to decide on who will leave the room and go downstairs to get pizza for their party. Jeff, a conniver, rolls a die to see which friend has to leave. Abed notes that by rolling the die, Jeff creates six different, fractured timelines: however the die lands, a small change in course could dramatically change the course of each of their lives.

The episode then plays out what happens in each scenario, which all have common themes but vary greatly in their conclusions, from relatively dull conversation, to one character getting engaged to the pizza delivery guy, to the apartment literally setting on fire after Pierce (the character, not the Nets player) gets shot in the leg by a stray bullet.

The episode (before the final cut scene) ends with Abed grabbing the die in what’s presumably the “real” timeline, explaining to the group that too much of their lives was already decided by chaos, and there’s no need to invite it in themselves. (Plus, by rolling the die with six friends surrounding him, Jeff had set up a scenario by which he’d never have to get the pizza.)

The arc continues in later episodes when Abed, on the brink of a mental breakdown, believes he sees his evil self in his Dreamatorium. (The show is weird when you say things out loud.) His evil self consumes him, most notably distinct from his regular self because of the goatee he now wears, along with the rest of the “evil” cast. THIS IS THE DARKEST TIMELINE.

It all makes sense now. This all began when Mikhail Prokhorov — the Jeff in this scenario — made the sneaky decision to roll the dice, setting up a scenario in which he’d choose one superstar. Like Jeff, no matter how the dice rolled, Prokhorov was protected; with seven friends and six sides of a die, Jeff set up a scenario by which he’d never have to walk downstairs; Prokhorov set up a situation where he’d absolutely get a star-laden team, spending nearly $200 million to ensure it. They took advantage of teams that thought their stars were overpaid, and out-bid themselves to get them. Even if the team flopped, no one could blame Prokhorov: after all, he tried!

the die bounced around between LeBron James, Dwyane Wade, or Chris Bosh in the 2010 offseason free agency bonanza, and Carmelo Anthony, Deron Williams, or Dwight Howard in trade over the last two years, before settling on the side of the die with Williams’s face on it. Acquiring Williams in and of itself required a bit of chaos. After spending the better part of seven months looking to acquire Anthony, only to lose him at the last second to the cross-town rival New York Knicks, the Nets made the deal for Williams out of nowhere before lunchtime the next day. Williams even has a goatee. He’s just hiding it behind his beard.

Paul Pierce has dealt with a broken hand, Brook Lopez a fractured foot, Deron Williams a sprained ankle, Kevin Garnett a broken spirit. The team’s structure has been under fire from the media, their defense unsimplified, their offense anemic for long stretches. Consumed by darkness (and one of the league’s worst defenses), the Nets struggle to beat even the league’s worst teams and get smoked by the best.

If only Abed (Bobby Marks?) caught Prokhorov’s die, refused to let him choose between one of the superstars around the table, and forced the Russian billionaire to pay for the pizza and bring it upstairs himself, maybe the Nets wouldn’t be in this predicament.

Instead, the gamble hit the table, and the Nets over lost ten draft picks in three seasons. 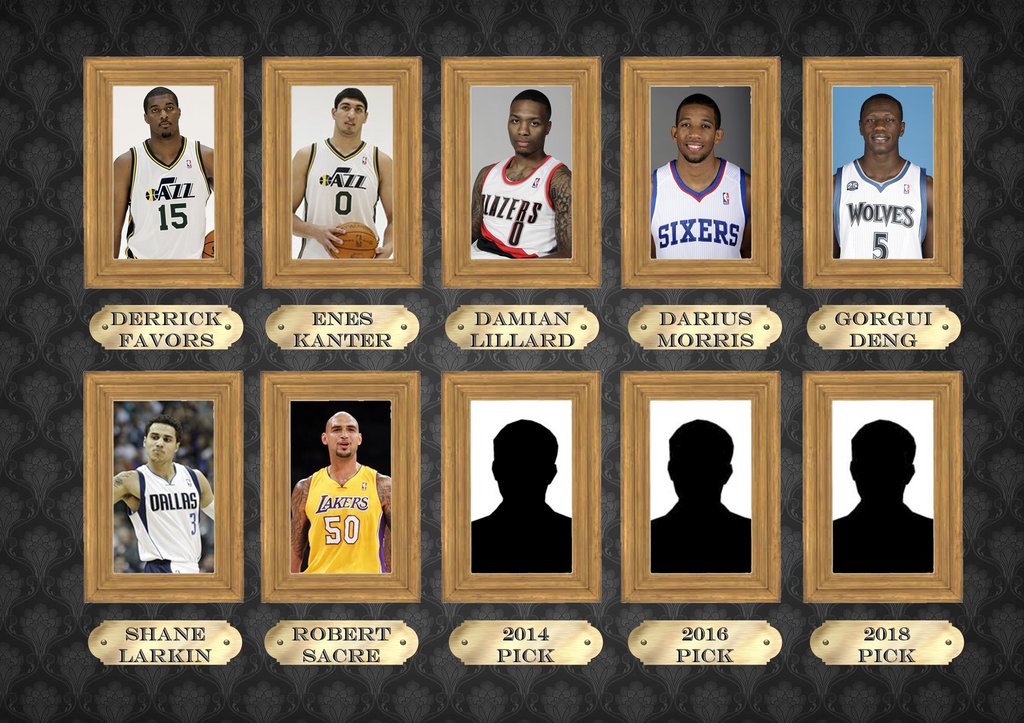 With a bottom-feeding record of 10-20 and without a win over a plus-.500 team since WHEN, there’s only one explanation that makes sense: the Nets are living in their darkest timeline, overtaken by the evil versions of themselves. Even their losing record (if you think of their losses first, which everybody who watches this team does) is .666!

But maybe I’m wrong. It wasn’t clear immediately at the end of the episode what the “real” darkest timeline was, or if a dark timeline even existed at all. Maybe it’s not fate that the Nets have sputtered out to an embarrassing start, but just a historically bad stretch of bad luck. But there’s only dim light at the end of this very short tunnel; even if the Nets sneak into a playoff spot, they’re still miles behind the Pacers and Heat, far and away the two best teams in the Eastern Conference. They’re still without Brook Lopez and fighting age with Kevin Garnett and Paul Pierce, and have enough money committed to this roster to compete with small countries.

Maybe a change of scenery is necessary, maybe they need to stay the course and tinker with their principles internally. Maybe this only seems like it’s the darkest timeline now, and the team needs to solve its identity crisis to find inner peace and worldly triumph. I honestly don’t know.

But my best suggestion at this point: shave the goatees.