The Morning After: Jason Collins! 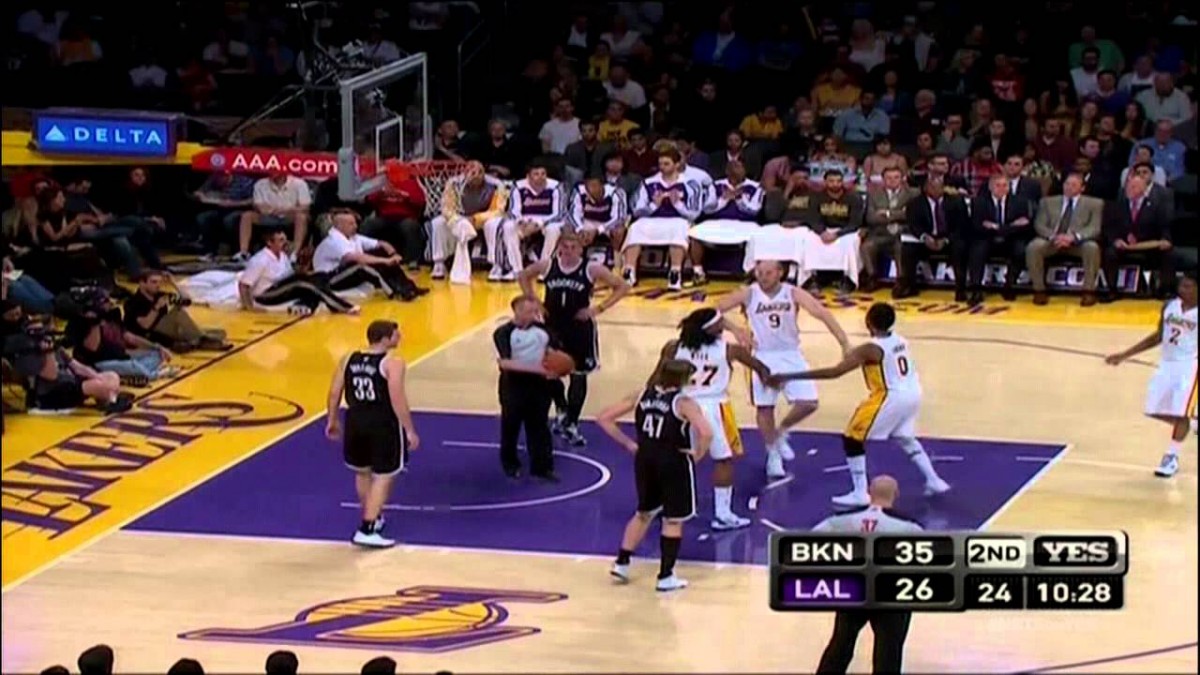 What happened: The Nets beat the Lakers 108-102, I suppose, but this was a night about Jason Collins and social progress. 10 months after publicly announcing he was gay, Collins became the first player in the four major sports to play in a contest. Collins did exactly what anyone who has ever seen him play would expect him to. In his 11 minutes, he had 0 points, 2 rebounds, 1 steal, as he Collins’d his way to great defense and hustle.

Where they stand: The Nets are now 26-28 and have once again hit that pesky two-games-under-.500 ceiling they’ve created for themselves. They are now sixth in the East, a half game ahead of Charlotte and one game behind Washington.

That was: Awesome for Jason Collins, who just wouldn’t show how much it meant to him. The game itself was fun when Deron Williams and Paul Pierce were doing things. Not so much when Andray Blatche was doing things. In typical Nets fashion, they nearly blew the lead.

Updated does-Deron-Williams-like-Bill-Simmons meter reading: It’s reading a resounding no. For the second year, Bill Simmons placed Williams high on his Worst Contracts in the NBA list, and for the second year in a row, Williams has gone to light up the league in the immediate aftermath. Deron since the column: 23 PPG on 49 percent shooting, 6.6 assists. Williams demolished the Lakers, and he actually looked healthy and fast. He finished with 30 points, 7 assists, and 6 steals, and he personally made sure the Nets didn’t screw this one up.

Paul Pierce vs. L.A.: Paul Pierce got booed pretty much every time he touched the ball in this game, and he responded with 25 points and an absolutely blistering first quarter. He also stepped up and played 33 minutes in the absence of Shaun Livingston, Kevin Garnett, and Marcus Thornton.

What did Marcus Thornton have to eat on Friday? I don’t want to know.

Collins gets cheers when he checks into the game: That was cool.

Andray Blatche Made Chris Kaman and Pau Gasol look like: Shaquille O’Neal and Hakeem Olajuwon, respectively. Of all the bad defense Andray Blatche has played this season, tonight’s was some of the worst. It’s like he was colluding with Collins to give him an opportunity to silence the haters.

Is Marquis Teague in the D-League Yet? Not yet.

Nick Young’s return was: Fun. He only played 20 minutes off the bench and actually functioned within an offense. His highlight was a looooooong top-of-the-key three that felt like he was shooting a layup.

What could have been: Almost-Net Jordan Hill had 11 points on 5-of-8 shooting and 8 rebounds.

Across The River: The Knicks had the day off, which is pretty much the best thing they’re capable of doing right now. They’re 21-35 and floundering a whole lot. They get to play Dallas and Miami this week!

Is Jason Collins a thing again: Yes! Very much so! I look forward to watching Collins for the remainder of his 10-day contract and hopefully for a lot longer afterward.

Next up: The Nets continue their West Coast gauntlet after two days off when they play the Portland Trail Blazers on Wednesday.