By Devin Kharpertian Posted on September 7, 2013 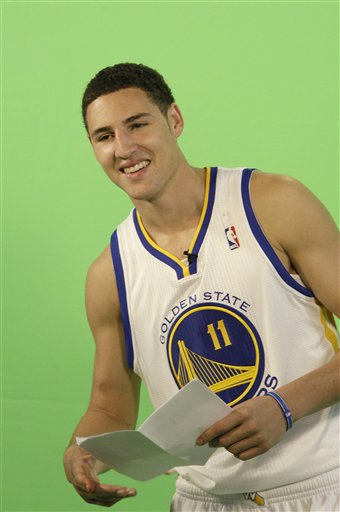 Strengths: They can shoot. The Warriors boast arguably the best pure jump-shooting backcourt in the NBA — Klay Thompson shot over 40% from deep in each of his first two seasons and Stephen Curry is a career 44.6% three-point shooter (and, in this man’s estimation, the best shooter in the league). Adding Andre Iguodala gives them perhaps the league’s best perimeter defender and makes them athletic as hell on the wings with Harrison Barnes. Iguodala’s also one of the league’s best all-around players and could flourish as a second or third option. David Lee is a double-double machine and a healthy Andrew Bogut is one of the league’s best rim-protectors.

Weaknesses: Bogut’s health is never certain and David Lee’s defense is so bad Kirk Goldsberry made a video replete with foreign music dedicated to it. Curry and Thompson aren’t world-beating defenders, either. And their bench? Barnes is solid (though some smart people argue that Lee should be on the bench with a small-ball terror lineup featuring Barnes & Iguodala), but Jermaine O’Neal and Marreese Speights aren’t going to scare anyone, and their backup point guard is an unproven rookie named Nemanja Nedovic or an unproven rookie named Seth Curry (Stephen’s brother).

Why You Should Watch: Because these two teams match up really, really well. Curry is an otherworldly shooter — seriously, just watch this:

What’s so impressive isn’t even that he hit all those threes. (Okay, that’s ridiculously impressive.) But what’s insane is that he hit them in so many different ways — off the dribble, on the break, spotting up from the corners, spinning into them sideways, flinging from 30 feet… When he’s on, he’s so much fun, even as an opposing fan. Plus, that video’s against the Knicks, so enjoy.

Other than Curry, this one’s bound to be interesting. The Warriors are fast, the Nets methodical. Iguodala is an athletic freak who will match up with the crafty Paul Pierce and Andrei Kirilenko. Kevin Garnett may make David Lee cry. Brook Lopez has struggled with Andrew Bogut in the past, but the two haven’t matched up since the Nets moved to Brooklyn. Mark Jackson is a second-year coach and a former point guard battling wits with Jason Kidd, a first-year coach and former point guard. These games should be fun to watch.

Most important move: Getting Andre Iguodala was a pretty big deal, especially since there was no way they were keeping Jarrett Jack. The hope is that Iguodala can slash and create for Stephen Curry in a way that Jack couldn’t. Jack was a big boost offensively, but that was mostly off his ability to call his own number.

Expectations? I’m going a bit above the mathematical projections and settling on 51 wins. What’s funny is that Warriors fans are far more optimistic than I am. People are drunk on the first whiff of sustainable success in two decades. My reasoning for 51 is as follows: The defense should get better and Andrew Bogut should be healthier. This is a hard team to project because the injury-prone players mean a vast range of possibilities.

What’s the team system? The Warriors like a lot of off the ball movement from their shooters. Stephen Curry and Klay Thompson spent so much time last year crisscrossing in figure eight patterns as Jarrett Jack dribbled dents into the floor paneling. Curry runs a lot of pick-and-pop with David Lee, which is reasonably effective. None of it carries the offensive potential we saw in these playoffs, when Curry ran high screen and rolls with three other shooters stretching the floor. That’s the future for this offense.

Matching up with Brooklyn: Is “no idea” acceptable? I’m not sure what the Nets are yet, given all their new pieces. Come to think of it, I’m not even sure what the Warriors are yet. Anyway, Curry shredded the Nets perimeter defense last year, and I’m not certain they have the right personnel to contain him. Maybe if Brooklyn had also gotten Avery Bradley from Boston, they’d have that problem figured.

The Golden State Warriors in under 100 words:

This team is caught in the David Lee quandary. Lee helps secure the Warriors a playoff spot, but so long as he’s prominently featured, they won’t win a title. Oh, and Stephen Curry needs to stay healthy and such for anything good to happen.