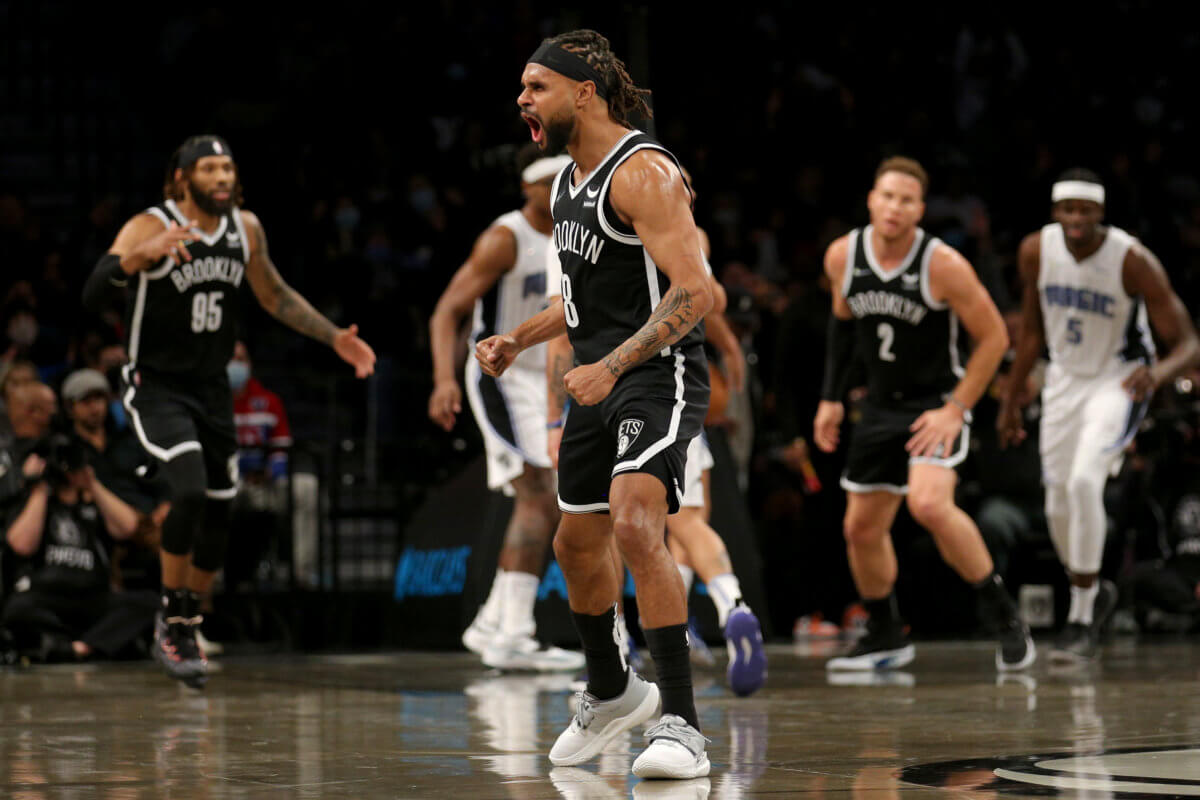 Patty Mills reacts after a three point shot against the Orlando Magic during the third quarter at Barclays Center.
Brad Penner-USA TODAY Sports

The Nets look to continue their three-game winning streak when they travel to Orlando to take on the Magic Tuesday night at 7 p.m. Fresh off an exciting win over the New York Knicks on Sunday, the Nets will look to keep climbing the Eastern Conference standings, with the hopes of avoiding the NBA Play-In Tournament.

Looking to build on their first undefeated week since the week of November 1st, they will be adding superstar Kyrie Irving back into the lineup, as opposed to sitting in the stands. In addition to Irving, the Nets are hopeful to get Seth Curry back in the lineup, who is listed as questionable on the injury report due to left ankle soreness. He was a very late scratch right before Sunday’s game.

Playing three games in four days and being in the front end of a back-to-back, the Nets are likely going to try to limit the load Kevin Durant has to carry on Tuesday. While there is no such thing as an easy win in the NBA, especially given the amount of talent the league currently has, Irving and company should be enough to pace the Nets to a victory over the 18-51 Magic.

The Nets and Magic have already met three times this season and this will be the fourth and final matchup between the two. Brooklyn won both games in November, while the Magic were able to take down the COVID-crippled Nets in a close game in December. Despite this being the fourth time the two teams have met, it will be the first time the Magic have seen Irving and only the second time they have had to face Durant this season.

While the Magic are no powerhouse, they are playing better basketball of late going 5-5 in their last 10 games.

The Nets can not take any opponents lightly as they need every win they can get going into the playoffs. Remaining as the eighth seed in the conference, they remain at risk of being part of the NBA’s Play-In Tournament and only have fourteen games to catch both the Cavaliers (4 games back) and the Raptors (3 games back).

The Brooklyn Nets had two players have 50+ point performances last week (Durant, Irving). … Kevin Durant won Eastern Conference player of the week for the 3rd time since being a member of the Brooklyn Nets and the 29th time of his career. … The Nets were fined $50,000 for allowing Irving into the locker room at halftime and after the win on Sunday. … Durant is 16-6 verse the Magic while Irving is 16-7 against the Magic in his career. … The Nets will wear their association (white) uniform for the game.