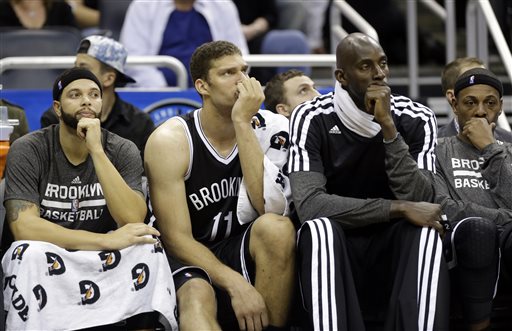 Is health a real issue for Brooklyn? (AP)

The Nets traded for 37-year-old Kevin Garnett and 36-year-old Paul Pierce this summer, reinforcing their front line and the stereotype that the Nets are a big, creaky team one injury away from becoming a laughingstock. Sure enough, the Nets are the second-oldest team in the league, the second-heaviest, and the third-tallest.

Sure enougn, the Nets are only six games into the 2013-14 season, and they’ve already been stung by the injury scorpion. Interestingly enough, the two veteran behemoths Pierce and Garnett are fully healthy, but the team’s still struggled with injuries.

Not quite. Williams was limited throughout training camp, sat through all but the team’s final preseason game, and entered the season on a minutes restriction. He’s looked quicker and stronger each game, but his production just hasn’t caught up yet, and through six games he’s averaging what would be a career-high in turnover rate.

Williams can shrug off questions about his ankle with his standardized refrain, “I appreciate your concern for my health,” but a sprained ankle two months before the season usually isn’t still news two weeks into the season. Yet here we are.

He isn’t the only one, either. Andrei Kirilenko, Williams’s former teammate in Utah, suffered back spasms in preseason, which has kept him in and out of the lineup. He missed the team’s first game, returned on a minutes restriction, and has since needed to sit out again. According to the team, Kirilenko also missed the team’s practice today at Fort Hamilton to rest, and as a result it’s less likely he’ll play Wednesday against the Sacramento Kings.

But the Nets don’t want to use health as an excuse for their 2-4 start. “That’s the league,” Garnett posited about the injury bug. “I’m sure every team can go down their roster and say ‘oh, this guy’s out.'”

But the Nets have already had a few extra DNP’s or restrictions. Shaun Livingston played through a neck issue. Paul Pierce nearly sat due to an unspecified illness, then nearly had his first scoreless game since his rookie season. Garnett hasn’t played more than 27 minutes in a game, as the team warily balances his insatiable desire to play with his need to rest and his more-than-lackluster production. Their depth has worked wonders here; while two starters (Williams and Joe Johnson) averaged over 36 minutes per game last season, only once has any singular Nets player played that much — Brook Lopez played 37 minutes in the team’s overtime loss to the Washington Wizards.

Other Nets come with pre-existing conditions. Lopez has endured three surgeries on his right foot in the last two years, one of which kept him out for all but five games of the 2011-12 lockout-shortened season, and most recently after the season to repair a bent screw in the foot. Jason Terry went under the knife this offseason to “clean up” his right knee. Joe Johnson ended last season with plantar fasciitis, an intensely painful foot condition. Garnett has missed an average of 16 games per season with various injuries since he joined the Celtics in 2007-08.

If the Nets continue to crop up health problms over the full 82-game season, developing a team-wide synergy for the playoffs could be incredibly difficult. But one welcome sign: through six games, they’ve had the exact same starting 5 each night.