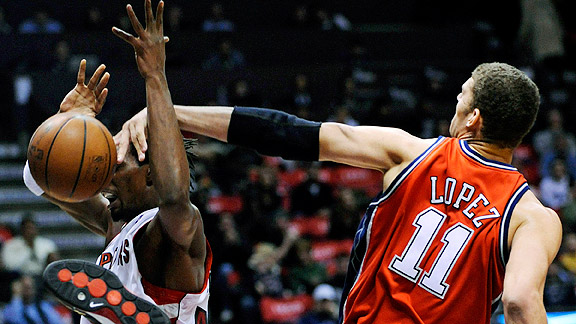 On Offense: After emerging last season as the Nets’ centerpiece on offense, Brook Lopez figures to maintain that role this season. Standing at 7 feet, Lopez is tall enough that few NBA defenders can bother him on offense with their height. In addition, Lopez features a post-game that is unexpectedly refined for a player his age. He uses his body well to get the position he wants, he has good footwork, and shows good touch with either hand around the rim. But his back-to-the-basket game is not his only offensive weapon. Lopez has shown range in the NBA out to about 18 or 20 feet, though his accuracy in his second season from there was not as impressive as it was in his rookie season. If he shies away from those attempts, it might be beneficial in the long run (as he usually takes them too early in the shot clock), but it’s always a nice weapon to rely on when facing lockdown post defenders like Dwight Howard and Tim Duncan. While Lopez markedly improved at creating fouls from his rookie campaign to his sophomore season, he still could stand to improve on his free-throw rate, especially considering he converts the freebies at such a high percentage.

Despite Lopez’s lanky, awkward body, he also runs the floor like a gazelle — putting his head down and sprinting for the rim in anticipation of a pass or lob from a trailing guard — and finishes acrobatic (at least for him) layups around the basket with ease. That knack for diving to the hole has made him a good partner for Devin Harris on the pick-and-roll, a play that has worked swimmingly for the duo over the last two years.

Nevertheless, there remain areas in which he needs to get better. As one of the team’s lone offensive weapons last season, Lopez was subject to loads and loads of double-teams, which he handled with mixed results. Even though the Nets’ improved shooting ability should alleviate the load on Lopez a bit, he has to learn to recognize impending double-teams earlier and kick the ball out instead of forcing the shot up with multiple men surrounding him.

On Defense: The opinions on Lopez’s defense vary based on whom you pay attention to, but there are a couple things that are constant: First of all, he rarely gets bullied in the post. Sure, there are the Howards and Shaqs who give him trouble, but he tends to stand his ground and not get dominated by very many NBA centers. Secondly, he can block shots. He has hovered around 2 blocks per game each of the last two seasons, and considering his limited athleticism, that’s a stellar achievement. Even so, his lack of lateral quickness is a major hindrance when he’s not defending one-on-one. Opposing teams look to exploit him in pick-and-roll sets because he can’t keep up with the quicker guard on a switch or show. Moreover, he often bails out opposing centers with cheap fouls rather than contesting fairly and forcing a difficult shot.

Miscellaneous: Most of you have probably seen J.A. Adande’s piece about Lopez’s knowledge of comic books. Let’s hope he can harness those memorization and retention skills in learning how to beat Roy Hibbert in the post this season.

Also, as a result of his bout with mononucleosis this summer, Lopez looks freakishly skinny. While it may have cost him a place on the National Team in Turkey, he seemed to have shaken off the adverse effects by the time preseason came around, so there’s no need to worry about that.

Comment: Brook Lopez is a future All-Star in the NBA and will be the central cog in the Nets’ offense again in his third season. One thing to watch out for is how he copes with the league’s more aggressive stance on player conduct with respect to the referees on the court. We all know, Lopez likes to show his emotions and pout on the court, and the referees aren’t going to be as flexible with it this season. That said, he’ll probably get more calls as he garners more clout around the league and won’t have to complain as much as he did the last two seasons. Still, figure that his total of 5 technical fouls will increase this year.