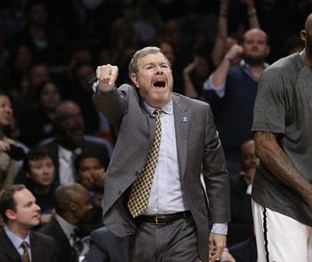 “That’s a heavy load for anybody, not just for Brooklyn,” Carlesimo said in a conference call with reporters Thursday. “I don’t know if that’s realistic the way the roster is right now. I would not say that team could not win a championship. We thought we could this year if things broke a little better for us. But if you have that on your plate, that you need to win a championship in two years, I think it makes it a little challenging.”

Carlesimo added that the Nets aren’t one of the favorites — duh — but did lop praise on Brooklyn, saying they’re a 50-win team that “could do well, particularly in the Eastern Conference.”

After firing Avery Johnson, the Nets went 35-19 under Carlesimo in the regular season before losing in seven games to the Chicago Bulls in the first round of the playoffs. Carlesimo was let go the next day.

This statement isn’t particularly new or controversial. If doing well means “they have the potential to get as far as playing Miami before getting swept,” I’d agree. The Nets locked into a good-not-great core last year. We knew they weren’t a championship team from the outset, not as long as the Heat were still in the East and the Thunder in the West (though they did beat OKC emphatically earlier this season).

A better coach and better system could help them improve, but there’s still a ceiling there. Despite their publicized goal, the point of “win now” isn’t to win a championship immediately (although that would be great), it was to erase the stench of New Jersey’s losses from the franchise. That won’t happen overnight, but winning — even if it’s just games, not championships — helps.

New York Daily News — PJ Carlesimo isn’t buying into the narrative for why he was fired: “People spin things the way they want to do it.”