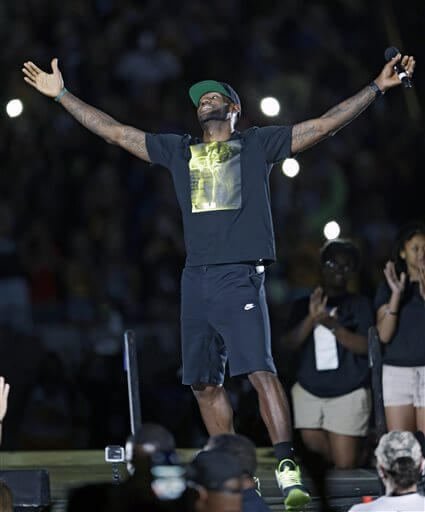 You already know what happened. Let’s get right to it.

LeBron James is the best player in the NBA by most estimations, and the second-best at worst if you really want to be “that guy” that makes the case for Kevin Durant. Kevin Love might not be the best power forward, but he’s in the conversation, and his ridiculous stats in Minnesota get overshadowed by his lack of playoff appearances, due to a weak Timberwolves roster outside of him. Kyrie Irving is an offensive wizard with incredible body & ball control, and having James & Anderson Varejao behind him will hide his defensive weaknesses.

If they can stay healthy, this team is built to win an NBA championship — they’ve got scorers, defenders, and the best player on the planet. David Blatt might seem like a curious choice — why would you hire a rookie NBA coach to lead the team with the NBA’s highest expectations? — but he’s seasoned for decades in Europe coaching Maccabi Tel Aviv and the Russian national basketball team, winning the Gold Medal in 2007 in FIBA EuroBasket. His mantle’s starting to sag from the awards: a four-time Israeli League Coach of the Year, the 2005 Russian Super League Coach of the Year, and the reigning Euroleague Coach of the Year after leading Maccabi Tel Aviv to a Euroleague championship. Earning player respect is not a necessity.

It all comes down to the Akron native, who looked like he was on an island near the end of his four-year tenure in Miami. James won two championships in four years flanked by Dwyane Wade and Chris Bosh, but Wade’s skills and the Heat’s depth eroded over the past two seasons, and James left to join perhaps the deepest team of his career. His stats are incomprable: James shot over 60 percent from inside the arc in each of his last two seasons and a combined 39.1 percent from three-point range, averaging around 27 points, 7 rebounds, and 7 assists per game. He’s a terrifying two-way player, and depending how you look at it, has either evolved in tandem with the NBA over the past decade or led the charge in its evolution.

This team is stacked, and it’s not just the guys you think. Dion Waiters is a talented shooting guard who improved his three-point shooting from 31 percent to 37 percent over his first two seasons, and he’s going to have a lot more open shots now. Tristan Thompson is better and more athletic than J.J. Hickson, and James made Hickson look good enough to earn a $16 million contract. Varejao is an elite defender when healthy, and the Cavaliers added swiss army forward Shawn Marion and shooter Mike Miller on the heels of signing James. Dan Gilbert’s children, recent staples of the NBA Lottery, can watch from afar this year.

The only team in recent memory that had an offseason as good as the Cleveland Cavaliers this year was the Miami Heat four years ago… for getting the same guy.