Andray Blatche: “I’m over the whole situation” in Washington 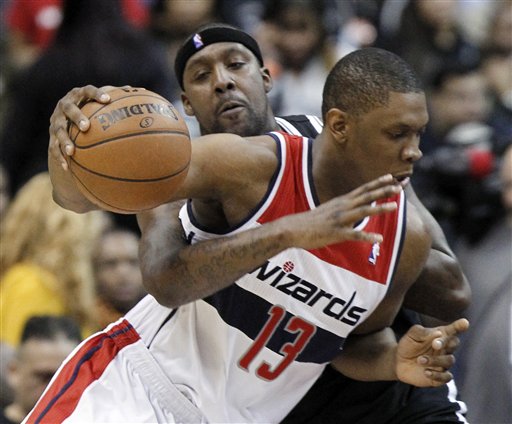 Andray Blatche told Washington Wizards blog Truth About It that he is “over the whole situation” in Washington, and though he expects to get booed tonight, it won’t bother him much.

“Honestly, I’m over the whole situation,” Blatche said. “This is a great city. It’s great that the team got better. I’m happy for them. I don’t have any problem. I’m quite sure I’m going to come out tonight and get booed … When Nick (Young) called me and told me they booed him, I was like, it doesn’t make any sense.”

Blatche infamously left Washington one year into a four-year contract worth $26 million via the team’s one-time amnesty clause following a series of off-court incidents:

In 2007, Blatche signed a multi-year deal that was delayed after an arrest in which Blatche solicited an undercover police officer, and for not appearing on a charge of driving without a license. Blatche was again arrested roughly a year later in June 2008, for reckless driving and driving on a suspended license for the third time. In 2010, the Wizards fined Blatche (and three of his teammates) $10,000 for making light of Gilbert Arenas’s gun charges in a pregame huddle. He’s struggled with maturity and conditioning issues, allegedly challenged a fan to a fight on Twitter, and engaged in various issues through social media.

Blatche added that Flip Saunders was his best coach: “He was a smart guy. His offensive plays were made for the 4 and 5.”

I also answered five questions for Truth About It on tonight’s matchup. That and the Blatche info below.